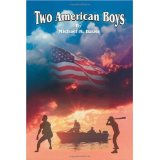 Two American Boys is a memoir of growing up in Virginia Beach in the late 1950's and 1960's.  Mike and Rick were best friends.  They spent their days playing in the fields and water of the area, playing baseball, learning to shoot guns, and learning about nature, both the animals of the region and the girls around them who were turning into women.  They went to school but it was never a major focus for them, just another duty children had to survive.  Their loyalty was to each other, their families, and the area they were growing up in.

As the boys grew up and were ready for high school, Rick was moved to California by his mother.  She was a single mother and needed to move where the jobs were.  As is common, they kept in touch for a while, then contact dwindled.

As Mike finished school, he continued to love baseball and had some athletic accomplishments playing it.  As was common with boys in the '70's, he was drafted into the Army as Vietnam was heating up and the Army needed more men than were volunteering.  After basic training, Mike was sent to Korea.  While there, he learned that Rick was in Vietnam and he had a bad feeling about Rick not coming home.

After the service, Mike went to work for the post office.  He became a father himself, and went through several marriages.  For years, he attempted to find Rick, though the Internet and other methods but was unsuccessful.  Finally, after years of trying, he found his childhood friend and was reunited with him.

Readers who grew up in the 1950's and 60's will find this book interesting.  Bauer has a real ability to remember the details of a childhood of that era.  Readers will find themselves nodding their heads in agreement as he relates how life was for most Americans in that time.  He grew up loving family, sports and country, and the book reflects that.  This book is recommended for readers who are nostalgic for their own childhoods, and for those who had a best friend who they lost and then refound.
Posted by Sandie at 8:31 PM