Praise Song For The Butterflies by Bernice L. McFadden 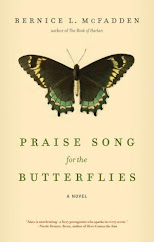 Abeo Kata is a happy child living in Ghana with her mother and father.  At nine, her life is a round of school and playing with her friends and spending time with her family.  Her father's mother lives with them and she has aunts and uncles and cousins.  Abeo's father has a good government job and they live in a nice house.  She has everything a child could want.
But then things change.  Abeo's father has issues at work and is suspended from his job.  He starts to drink heavily and then the marriage has issues.  His mother tells him there is only one way to reverse the family's luck.  He should observe trokosi with Abeo.  Trokosi is a ritual sacrifice of a young girl who is taken and given to a priest in a shrine.  There the girl is left for years or even life, her service an atonement for some evil done by the family.  Abeo's father refuses but as more and more bad luck occurs he finally snaps.
He takes Abeo far out into the country and leaves her with the priest and his servants.  Abeo is struck immediately and her nice clothes are taken away, replaced with rough clothes.  She is forced to work all day in the fields and is fed little and only gruel.  Along with the other girls in the shrine, she is beaten, forced to hard labor and when her period starts, given to the priest as a sexual slave.  The girls often become pregnant and their children grow up in the shrine, the girls to repeat the cycle and the boys as servants also.  Abeo cannot imagine what she could have done to deserve such a fate.
Eventually, after fifteen years of servitude and tragedies that will live with her for life, Abeo is ransomed by an aid organization.  When she is reunited with her extended family, she finds that she was an adopted child, her birth mother someone she had considered an aunt.  Abeo is actually an American citizen as she was born in the United States and brought back to Ghana to be raised by the family.  She is able to go and live in New York where she tries to recover.
The practice of trokosi is a real one.  It was finally outlawed in Ghana in 1998 but even today it is estimated that there are 4000 to 6000 girls in this horrific system.  The girls are enslaved and their lives become one of servitude and the reality that they belong to someone else who can do anything to them.
This book was nominated for the Bailey's Women's Prize for Fiction.  It outlines a practice that most people have never heard of, nor would believe is still practiced.  The book is difficult to read but the reader must realize how much more difficult it is to live and only publicity and knowledge will allow trokosi to be stamped out.  This book is recommended for readers interested in other cultures and those who want to improve women's lives.
Posted by Sandie at 7:59 AM