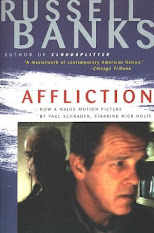 Wade Whitehouse's life hasn't turned out like he expected as a young man.  Back then, he was a local high school athlete, then a young husband and father, known to everyone in town.  He had a job at which he expected to progress and had even been named as the town's policeman.  But like his tired New Hampshire town, life hadn't been kind to him.

Now Wade is approaching middle age.  His athletic body is long gone, overlaid with the residue of many years of eating junk food and drinking till the bars close.  His marriage has broken up, taking with it his daughter and the house he had built himself for his family.  His job is a dead end and the police job is nothing more than a glorified traffic guard and bar bouncer.  He is known by everyone in town but he can't think of many who like him.  In his darkest hours, he knows he is nothing more than the failure his father always predicted he would be.

When an out of town union leader is killed on opening hunting day, Wade starts to come out of his fog.  He suspects that the hunting accident may not have been an accident at all.  It may have been a way to hide the fact that the mob has been using union funds to purchase land all over town.  A new skiing resort is in the works and the few influential men in town are all in on the plan.  Wade is determined to find out the truth and expose the plot.  Will he be successful or is it just another dream destined for failure?

Russell Banks has written a searing expose of masculine expectations and the slow realization in midlife that things don't always work out.  Wade has positive qualities but he is his own worst enemy and he can quickly turn gold into dross and ruin everything he hope to achieve.  It is heartbreaking to watch him attempt to change his fortunes repeatedly only to have his temper and drinking overcome his dreams.  It is my first read of one of Russell Bank's novels but it surely won't be my last.  This book is recommended for readers of literary fiction.