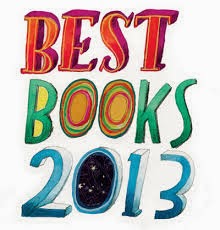 Another reading year has come and gone.  As in other years, some books delighted or instructed or entertained more than others.  Of course, any list of 'best books' is highly individual.  I might rate a top-notch mystery higher than an average book of literary fiction while other reviewers would never mix genres.  I read 141 books in 2013 and here is my list of the books I enjoyed most:

1.  Ready Player One by Ernest Cline.  Sci-fi and just totally entertaining.
2.  Joseph Anton by Salmon Rushdie.  His memoir of his time living under threat of death from fellow Muslims due to his writing.
3.  The Golem And The Jinni by Helene Wecker.  Fantasy and totally original.
4.  Luther by Neil Cross.  Mystery.
5.  The Thinking Woman's Guide To Real Magic by Emily Croy Baker.  Fantasy and just a delight.
6.  Cinnamon And Gunpowder by Eli Brown.  Fantasy with a pirate twist and a lovely book full of plot twists and joy.
7.  The Kept by James Scott.  A debut novel stunning in its power.  Historical fiction/suspense.
8.  The Republic Of Thieves by Scott Lynch.  The second in his Gentlemen Bastards series; fantasy that is compelling and delightful.

There were also lots of books that I'd consider long-listers.  They are:

I fell in love with two new authors (to me) this year.  Jo Nesbo writes mysteries that are compelling but the true draw is his hero, Harry Hole.  C. C. Humphries, the creator of Jack Absolute, writes swashbuckling tales that are just a delight to read.  I was also blown away by the debut of S.M. Wheeler.

What's up for next year?  I'd like to read at least 150 books.  I have several series I want to work on.  I started reading Stephen Donaldson's Thomas Covenant series thirty-five years ago.  Now that he has finished it, I want to go back and read it all again as there are several new books in the series I haven't read.  I want to do the same with Game Of Thrones, the Hillary Mantel books about Cromwell, and 2014 is the year I want to tackle the Wheel Of Time by Robert Jordan.