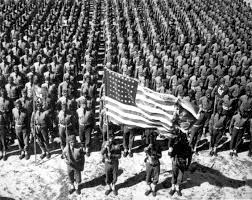 In this well-researched and page-turning history of World War I, Burton Pines traces America's involvement in the war and the consequences of their decision to enter.  As most know, the war after several years had grown to a stalemate and trench warfare was the result.  Periodically, one side or the other would mount huge offenses to overrun the other side's trenches and force their army into the open but these offenses invariably failed at the expense of thousands of lives on each side.

America remained neutral for the first few years.  There was, Pines argues, no real American incentive to enter as the United States never faced any danger from the war and had no reason to enter.  Then slowly, as Woodrow Wilson moved further into his presidency, the tide shifted and America came to see itself as more aligned with France and Britain.  This perception was created by extensive British propaganda, by America's increasing financial ties with Britain and France, and by one of the most effective American propaganda campaigns to be seen.

Finally, the momentum tipped and America entered the war.  Although American troops never played a deciding role due to the amount of time it took to create a standing army and the logistical support necessary to put it overseas, the mere fact of one side getting millions of replacement troops while Germany had no way to compensate for their lost soldiers created a situation that ended the stalemate.  When new offensives were put in place by Germany in anticipation and failed, and Britain managed to force Germany from their defenses, the war was soon over.

The peace that resulted was, it was argued, a calamity that laid the groundwork for World War II and the Cold War that came after that.  The Treaty of Versailles was punitive in the extreme, forcing Germany to accept all blame, taking territory and natural resources and forcing exorbitant reparations on Germany.  Although the U.S. tried to mediate the terms, France and Britain were determined to force the German government to accept every demand they made.  This laid the groundwork for a weak German administration that fell prey to the appeal of fringe elements such as the Nazi Party.

Burton Pines has written a convincing, well-researched history that manages at the same time to be very understandable to the lay reader.  He has a varied background that makes him an excellent person to write such a book.  After majoring in history and teaching it in college, he moved to Time magazine where he was a reporter and later an editor.  He then spent more than a decade in Washington where he supervised a group of policy experts.  This book is recommended for readers interested in history and how decisions can have far-reaching consequences.
Posted by Sandie at 6:42 AM