The Beauty Of Humanity Movement by Camilla Gibb 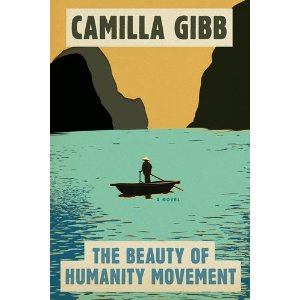 Maggie Hai has come to Vietnam.  Her job is to catalog the art of a grand hotel in Saigon; her mission is to discover more about her father's life.  She lost her father early but knows he had a hard life in Vietnam.

After searching for anyone who may have known him in the pre-war days, she is directed to Old Man Hung.  Hung has lived what most would consider a life of deprivation and sorrow.  Pushed from his family by a mother who did not value him, he has made his life in the city as a pho cook.  For years he had his own restaurant but now he pushes his cart to a new location each day.  He has never married but made a family from those who surround him, taking care of everyone he encounters.

Before the war, his restaurant was the gathering place for the artists and poets and authors who made up the revolution.  They called their movement The Beauty of Humanity Movement.  They wrote against the dynasty and French government that ruled them, then after the French were overthrown, they turned their criticism against the Communists who, they said, were betraying their ideals.  That led to their downfall.  The men were brutally seized and taken to reeducation camps.  There not only their bodies were crushed but their minds also.  An artist might have his hands shattered, and that had happened to Maggie's father.  A poet might have his tongue removed.  No one knew what happened to the men once they were seized.

Hung was left as the guardian of their ideals.  He kept a shrine to Dao, a poet who took the time to educate him when he found Hung had no schooling.  As Maggie and Hung talk and she meets his friends, her father's story starts to emerge also.

Camilla Gibb has written an important book illuminating how Communism impoverished the nations it overtook.  While the material poverty was great and obvious, what was more stunning was the impoverishment of free thought and art.  The reader will experience the book as languid at first, but it slowly reveals stunning moments that will never be forgotten.  The characters are finely drawn, and the ability of men like Hung to make a life out of whatever life allows them is inspiring.  This book  is recommended for all readers.
Posted by Sandie at 6:38 AM

Wow, this book sounds amazing - you can't get much better than "languid" and "stunning" in my opinion.

I'm not familiar with much of Vietnamese history so this book definitely has my attention.

Thanks for being on the tour.

I was being convince by this book. It is not easy to be in that situation and I wanna know how she survived through all of the hardships she have been into.