On Stranger Tides by Tim Powers 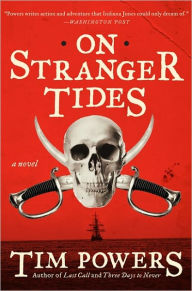 Jack Shandy is sailing to Jamaica where he has discovered an inherited fortune awaits him.  He is bored on the trip and makes the acquaintance of one of the only other young passengers, a lady named Elizabeth Hurwood, sailing with her father and his friend.  As they near their destination, disaster hits.  The ship is attacked by pirates.  Shandy's ship doesn't stand much of a chance as it turns out that Hurwood and his friend have hired the attack and join in the fight.

Shandy is one of the few passengers to fight back and as such he is given a choice; either die or join the pirates himself.  Thus starts another life, one where he is cook and all around handyman to a group of pirates and their charismatic captain.  He becomes close to the captain when he saves his life and before you know it, Shandy is chosen to accompany the captain and his friend, Blackbeard, on a trip to Florida to find the Fountain of Youth.

It turns out that Hurwood has an occult scheme in mind and everything that has occurred is in furtherance of his plans.  Shandy, who has developed feelings for Elizabeth, is determined to stop the plan which will end in her demise.  As he fights against time, he is accompanied by zombies, those with age-old magic and betrayal.

Tim Powers is one of the best of the genre.  Each of his books is unique as he plays out his fascination with such diverse topics as Victorian poets, pirates, modern day spies and professional gambling.  On Stranger Tides served as the inspiration for the Pirates of the Caribbean movie.  Powers has gone The Phillip K. Dick Award twice and the World Fantasy Award three times.  This book is recommended for fantasy readers.
Posted by Sandie at 6:22 AM