Heads Above Water by Stephanie Dagg

Stephanie and Chris Dagg are adventurous.  In their 40's, they decided to move to France, taking their three children.  Their plan was to purchase a fishing farm where they would rent to fisherman on vacation.  They located a farm with three large lakes and purchased it.  Then came the adjustment.

The farm had two houses close together, neither of which were actually habitable.  The family spent months cleaning and renovating the houses, dealing with French contractors to get heat, electricity and running water.  In the meantime, they had to get the children started in school.  Actually opening for business took quite a bit of time, as there was enormous amounts of work to do and forms to fill out in order to be legal.

Heads Above Water is Stephanie's account of their first years after the move to France.  She describes the work needed to get the farm into shape to function as a business.  The family had to be resourceful and thrifty, growing food as well as foraging for it.  They bought lots of animals, and started a side business revolving around llamas.  Other animals such as guinea fowl were not successful, or like the stray cats, quickly overran the place.  The Daggs handled all the animals and their issues with their normal aplomb. 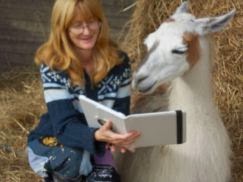 This book is recommended for readers who enjoy travel adventures, as well as those interested in families who have the bravery to live out their dreams.  The writing is breezy and informative, and the reader quickly starts to cheer for the family in their misadventures with French bearucracy.  Readers can find out more at thiis link.

Thanks Sandie, so sounds like you enjoyed the book, right? Emma

Thanks for hosting me today, Sandie! I really appreciate you taking the time and trouble to read and review my book.
Best wishes,
Stephanie

Yes, I did enjoy it. I love travel writing and the Dagg family's adventures were humorous and interesting.