Buried On The Fens by Joy Ellis 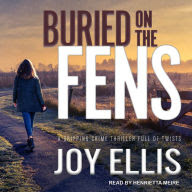 Detective Nikki Galena and her team are investigating two murders in their area.  The first was the vicious murder of a prominent local businesswoman; a brutal murder with no real clues left behind.  While investigating that, the team gets a report of another body found but this one is much different.  While getting ready to renovate the local church, a body is discovered in the graveyard.  This burial was unauthorized and the body is about thirty years old.

The body is identified as a man from the village of Quentin Eaudyke, a man missing for twenty years and a man hated by his neighbors.  Gerald Hammond, the victim, was suspected of being the man who terrorized and abused several local children, and then was later suspected of killing and hiding the boy of his own child, a daughter.  No one cared when he went missing and it was assumed he drowned and his body washed out to sea.  Now the story is revealed that he was himself murdered and hidden away.

As the investigation proceeds, the businesswoman was found to be a member of a local private club, one made up of women who came together both for business networking and because they were lesbians.  The group was kept under the radar due to the prejudice gay women still encountered.  The daughter of a member is the next woman to be murdered and the police become focused on the club.  As they investigate, the two murder inquiries start to blend and it becomes apparent that the same person is involved in both.  Apparently, the murdered is not through and it becomes a race against time.  Will the police solve the case before more murders occur?

This is the seventh novel in the Nikki Galena series.  Galena has mellowed over time, having put to rest many of her own personal demons.  She has built a strong team who work well together and whose talents merge nicely.  Readers will enjoy watching the team solve another case and the interplay between the team members.  This book is recommended for mystery readers.
Posted by Sandie at 8:25 AM